Puffy AmiYumi is a J-Pop/Rock duo of girls that sings in English and Japanese. They remind me much of Shonen Knife, except prettier. Catchy pop-rock sung by pretty Japanese girls. I think that’s a formula that you can take to the bank. 😉 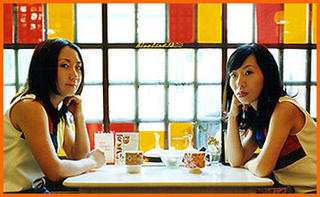 Anyways, AmiYumi has hit it big in the USA and have got a large fanbase there. They even now have a cartoon series on The Cartoon Network. That’s when you know you’ve MADE it.

Gawker has a sarcastic write-up with photos of a recent AmiYumi after-party that they’d attended in NY. Here’s a sample:

The BMX champ was actually a pretty nice fella. Possibly a strong indicator of a lame party: Even the extreme-sports guy has nothing but nice things to say about everyone. And even he is eyeballing the exit. He showed us his scars. They were, indeed, extreme.