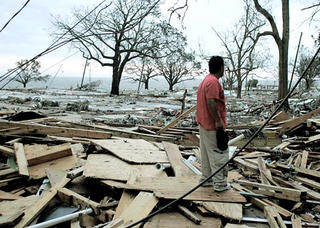 Hurricane Katrina has wreaked havoc across the southern parts of the USA. This and many other natural disasters are constant reminders that nature is deadly effective at killing and destroying. Remember the tsunami? If you didn’t die in the waters, you might die from the lack of clean water and the multitude of diseases. Nature doesn’t care if you are rich or poor, what colour you are and which God you believe in.

So to put things in perspective – why are humans still killing each other over trivial things like those above? Because Nature plainly does not need our help.

However it is also during disasters whether man-made or natural, that we see the human spirit shine through. If only that human spirit is forever present instead of being only in spurts.

In other news, the former State Opposition Leader of New South Wales had attempted suicide yesterday evening. This was after new allegations had surfaced about his conduct after that earlier incident.

One thought on “Doom and Gloom”