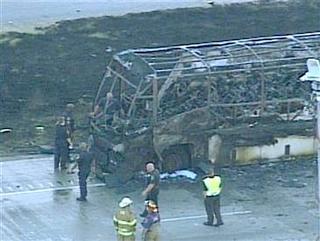 Hurricane Rita has claimed her first casualties, albeit indirectly. A bus carrying elderly evacuees has exploded into flames and left as many as 24 ppl dead. It is believed that overheated brakes caused the bus to catch on fire which then caused oxygen tanks carried by some of the elderly to explode.