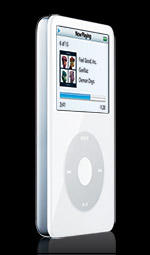 I’m not a fan of Apple. I like their product designs and their marketing even though I don’t fall for them. Though I appreciate what they’ve done with the portable music player market because before the iPod, no one really knew how to get it right.

Still, Apple’s computer products cost too much considering the alternatives. I would like an iMac G5 but it doesn’t make economic sense when a similarly powerful PC can be had for $1000 less. And the iPod well, ever heard of Creative, iRiver, Samsung … ? The prices in the MP3 player market are more or less even depending on the features that you want. My point is: iPod is not your only choice.

When I first saw the iPod Nano I was impressed but I suspected its hardiness because it looked so flimsy. And I was right. Apple’s marketing prowess is not in question here, they are *really* good at that. But don’t believe the hype – there’s a bigger world out there than just Apple’s products.

Now Apple has just released an iPod that can play video. Were you like me and went, “Oh. Ok.” ? The screen in a headrest on a plane or in a car is about the smallest size that I will watch a show on. So why would I get excited that I can watch video on the tiny iPod screen?

If you were one of those that hyperventilated, “Sheeeeet, I HAVE TO HAVE ONE!”, here’s a reality check (via The Register):

… five big issues to be dealt with, in turn:

Be smart. Do your research and don’t get sucked in by the marketing.