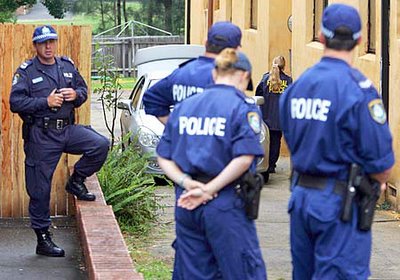 So the Australian Government passed several amendments to existing anti-terrorism laws during an emergency recall of the Senate late last week. The changes took approx. 20 minutes of debate and so forth to pass. Quick by any standards. Said changes include additional powers of police to arrest:

Before you can even say, “Hmmm…?” 400 state and federal police carried out simultaneous raids in Melbourne and Sydney early this morning (2am EST) and arrested fifteen people. According to Victorian Police Commissioner Catherine Nixon, “Some of the arrests Tuesday were made possible by the new legislation.” Complete round-up of the story can be found at The Australian.

I applaud the Australian Government for looking after us. I do feel safer knowing that there are laws and vigilant police personnel helping to keep the peace. But somehow this all reminds me of the oft-quoted:

“When they came for the gypsies, I did not speak, for I am not a gypsy.

When they came for the Jews, I did not speak, because I wasn’t a Jew.

When they came for the Catholics, I did not speak, for I am not a
Catholic.

And when they came for me, there was no one left to speak.”