Mr. Kenny Sia recently joked about terrorism (post since edited), and got schooled for it by Mack Zukifli, among others.

In our current global climate, terrorism will remain a sensitive topic when ppl have died and are dying daily from it. Even more so when, due to the actions of a fanatical few, an entire group of human beings on this planet – namely Muslims (1.5 billion of them, ref. Wikipedia) are being maligned for it. So if you want to joke about it, at least do it in a balanced way. Like so …

“The American troops were going through the caves over there in Afghanistan and its unbelievable. They found fax machines, they found copiers, they found computers. I’m telling you, they found so much loot in these caves that it looked like Winona Ryder’s place.” —David Letterman

“Scientists in the United States Army have developed sandwiches that remain edible for three years. That’s worth fighting for, now isn’t it? The jihad is offering their guys 72 virgins, we give three-year-old sandwiches.” —Jay Leno

(All jokes referenced from here)

Even if you make the terrorists the sole butt of your joke, you can do it without sulllying the religion. Like the good folks at The Family Guy who made Osama bin Laden look like an ad-libbing buffoon with an American accent. 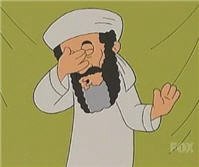 That said, if you pick a sensitive topic to joke about you’d always run the risk of offending someone. This is amplified further when the words are static, and are stripped of facial expressions and tone of voice. Which is why the choice of words used is paramount online.

Think thoroughly about what you will be saying and you can avoid having to justify yourself after you’ve said it. Unlike in real life, you do have plenty of time to think before you hit “publish”.

And I feel like I’m repeating myself over and over with this – Blog Responsibly.

For further reading about the fine difference between a joke and an insult, the Poynter Institute has an excellent article here.