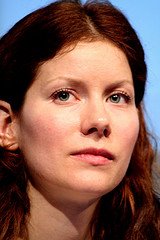 Every male geek’s fantasy woman: someone who’s into the stuff that they like and is a babe. This woman would definitely qualify except for the fact that she’s real.

“When I’m fed up with photo shoots, I run away to code,” said the Colorado-born model, who learned Unix at school and credits her computer-engineer brothers as inspiration.

What? Unix?! Dayum. And she blogs too.

Ok yes I know I’m a bit misogynistic here. I do contend that there exists good looking women in this world that are as technically and IT proficient as any male geek out there. Heck they can even be models too. It’s just that I haven’t come across any in my years working as one of those male geeks. [Addendum 8:18 a.m. – I meant in a professional capacity around workplaces 😉 ]