I woke up to the sounds of kids playing on the street, and cars honking at them as they passed because they were waving the Aussie flag, and to the cries of the now ubiquitous chant of “Aussie, Aussie, Aussie! Oi, oi, oi!” 🙂

And what do Aussies do on this day? Beer and BBQ. 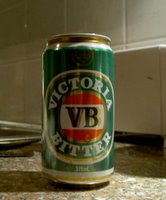 And for West Aussies here in Perth, fireworks at the foreshore at 8pm tonight.

But think I’ll just chill out and do nothing. Happy Australia Day! 🙂

News.com.au has a good round-up of the celebrations around the country today.