If it wasn’t for every one posting updates and retro-tastic photos of their moms on Facebook I would have totally forgotten that it was Mother’s Day yesterday. That is because I don’t celebrate Mother’s Day. Why? Because every day is Mother’s Day son! 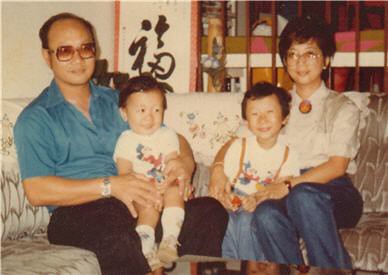 But then she called me …

and now I feel guilty. So here’s a tribute to my mother. My mom is great because:

Oh and one last thing – she’s great because she didn’t marry that other guy and married my dad instead, thus giving birth to me and my brother. 🙂

… and I work in tech support which means I have very little patience left after work. It gets drained out of me. Imagine doing tech support all day at work and then coming home and having to do it for your family too. The friends and families of doctors and lawyers would take advantage of their skills and knowledge too but needing a doctor or a lawyer is not an every day thing.

Unlike tech support. Tech is pervasive. It’s almost everything that we touch these days, especially in recent years when the iPhone started the whole smart phone era.

OMFG I only just finished teaching my mother how to text!

Anyway where was I? Oh yes, coming home and having to do tech support on a daily basis for my family. The point of this story is that I get very impatient and grumpy with my family.

I am sorry that I get pissy but I just finished work, can you just let me sit down for a few minutes without asking me how to forward an email please?!?! And no I don’t know why that website is not loading. I don’t work for them. Look, if you’ve already turned the modem off and on like I’ve taught you and the site is still not showing up, then their server is down. And no I can’t bring it back. I don’t have magic powers! I’m not fucking Dynamo!

Mom: I cook and clean for you and you can’t even help me out with this?

Me: I appreciate everything that you do for me but I don’t come up to you when you are relaxing and ask you to cook and clean some more right???

Mom: That’s not the same and you know it.

Me: How is it not the same? *argh* Ok ok fine. Right-click on that icon. Right-click. Right mouse button. Click it. See the button on the right? Click it. Yes, click it once. Once. Click. Right-click! RIGHT-CLICK!!!

And you wonder why I drink.

On Sunday, we celebrated mom’s 62nd birthday at home by having popiah, a form of fresh spring rolls eaten by the Chinese in Malaysia and Singapore. Present were my family, my aunties and uncles, and cousins and we all gathered around the table to hand-assemble our rolls. It’s communal and fun – getting everyone involved into the process of the meal is a very bonding experience.

The last time we did a popiah session was the Mid-Autumn Festival of 2006 at my parents’ old house. If you wanna see how one makes a popiah, there’s also a short clip which I’d shot of mom making one.

Mom is kinda awesome like that. Or you know, she really REALLY wants a daugher-in-law.

My brother is a man of big contrasts. He watches and reads movies, novels and magazines which are cerebral and thought-provoking. Yet in his every day life, he lives it the simplest way he can. He has simple needs – his job, his cigarettes, his beer, his food and his like-minded friends. He doesn’t splurge on material things, but unless he’s planning for a holiday or a major purchase, he doesn’t save much either because he doesn’t believe in rainy days. Although he does live within his means and he has no debt.

Our Cantonese maid in Malaysia used to say this about him, roughly translated:

If the sky ever falls on him, he’d just treat it as a blanket.

He doesn’t plan much for the future. This of course, causes a great deal of consternation for my parents. Because to not have a plan for one’s life and to have a just-enough mentality about money is very much not the Chinese way. We’d prefer stability over uncertainty while he lives it one day at a time.

In a way, his easy-going approach towards life may be enviable. Because while we fret and worry about things that may never happen, he’s cruising along enjoying the simplest pleasures that life has to offer. Like I’ve always said though, ultimately our lives are about the journey rather than the artificial milestones and timetable. There isn’t a “correct” way to living, and we are all entitled to seek happiness in our own ways.

So happy 29th birthday Marvin! Maybe you should be the one lecturing us about our lives rather than the other way around. 🙂 On a fine Northbridge evening, the family headed out to K’s Restaurant for mom’s 61st birthday dinner. Joining us were Uncle Alex and Aunty Judy, and cousins Reucas and Yvonne. The food was excellent. Everyone enjoyed what they ordered, especially my parents and Uncle Alex and Aunty Judy who don’t normally go out for gourmet food.

This is a scallop puff pastry thing that everyone had as entree. K’s fish of the day. And we finished off with a selection of desserts: green-tea brulee, mango pudding, black sesame pudding and a very light Japanese cheesecake. Mom’s 61st birthday is tomorrow and we are having a family dinner on Sunday night. At first we were gonna have the usual Japanese dinner that we do every year (her favourite!). Then I had a brain flash and thought we should try out something different this year. So we are going to K’s Restaurant in Northbridge to sample their French-Japanese fusion cuisine.

I’ve been there a few times many years ago – last time was NYE 2000. I wonder why did I stop going? The food was good and the ambience was excellent. You get to choose from 3 degustation sets with prices at $38, $45 and $55. The style of cuisine is similar to Tetsuya’s in Sydney at a third of the price. I’m assuming that from the pictures and descriptions on the Tetsuya’s site, and from what people have told me because I have never been. The idea of paying lots of money for food does not run in the family, so all this time that I’ve been going to Sydney my relatives there have never taken us. 😉

K’s do not have a website so I can’t show you what it looks like but no fret – I’ll be taking pictures. I always enjoy sharing new places to go with my folks, so it should be a fun night for us all.